Help! Should I be worried by these pains!!! 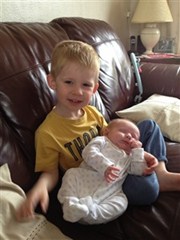 I'm 33 weeks and for the past couple of hours I've been having dull aches like period pains that come anOther hatchet aren't excruciating pains, but nether the less they come, peak and go in a matter of about 15 seconds. I haven't noticed a regular pattern with how often they come. I am having braxton hicks and would describe these as uncomfortable rather than painful. I can feel loads of pressure down below and am having a wee every 5 mins. I haven't got any bleeding or had a show, no waters, but do have heavy discharge, which is typical of 3rd tri isn't it???

i don't know if I should be concerned by this? I'm over anxious I think because of all the bleeds I've had during this pregnancy. I won't want to look like a drama queen or like I'm a hypochondriac. I've managed to bath C and get him ready for bed, so the pains arent crippling but they are there all the same. I don't know what to do.

DanielleMFM
Aug 2, 2021 8:03AM
Due in April 2022
Hello, and welcome to Due in April 2022 and huge congratulations on your pregnancy! I'm @DanielleMFM and it's great to see you here. If you'd like to join this thread and meet others due this month too, please introduce yourself. If you're due in a different month, check out our other birth clubs here. Bookmark this thread…

DanielleMFM
Jul 14, 2021 10:43AM
Silver Cross Motion All Size 360 car seat: the feedback review thread
Hello. This is the feedback thread for those of you who are testing the Silver Cross Motion All Size 360 car seat as part of our latest MadeForMums product test. Please give us your feedback on this thread by answering the following 5 questions and providing your pictures of your baby/child using the car seat. Everyone who…