I know that this gets asked a lot and that I will just have to wait to know for sure but I’m super impatient so thought I’d see what some of you ladies think...anybody have any experience...? I’ll try and be brief(ish) haha

So I am breastfeeding my son and he was born October 2017 and once I stopped the initial after birth bleeding I haven’t had any bleeding until September 2018 when I had a day of light spotting, followed by a full period in October and November (30 Day cycle, 7 day bleed).

Now hubby and I are TTC as we would like the children close together and decided that once my cycles returned we would TTC. So yesterday, cycle day 16, I did this test (photo)...I know it’s too early but like I said I’m not the most patient haha, I don’t know why I did it I just had some in the drawer and thought I would 😂🙈. So I wasn’t really expecting it to be possitive, I saw that dark negative line and went to take it to the bin when I saw this second line start to appear, it was immediate, I mean I literally POAS, flushed and washed my hands, and by time I got to the bathroom door it was appearing. It had some colour but it was faint.

So I decided, for good measure, to do another test...or 4. A couple yesterday and a couple today, one using first urine of the day. All negative. I watched them for AGES to be certain. Definitely negative.

So is it possible this is an evaporation line? Or could it possibly be a very early positive but just so early that the other tests didn’t pick up on it? All were the same internet cheapies so not mixed brands etc.

It’s driving me a bit crazy now thinking about it and calculating Dates and wondering...is it possible? I want to be excited but I don’t want to be excited if you know what I mean. Thankfully  have no more tests left in the house and I won’t be buying one until I am officially late to avoid temptation, but I think this may be the longest 2 weeks of my life!

What are your thoughts? Am I just being totally daft? It really looked positive to me 🤔 Due AF on Christmas Day...xxx 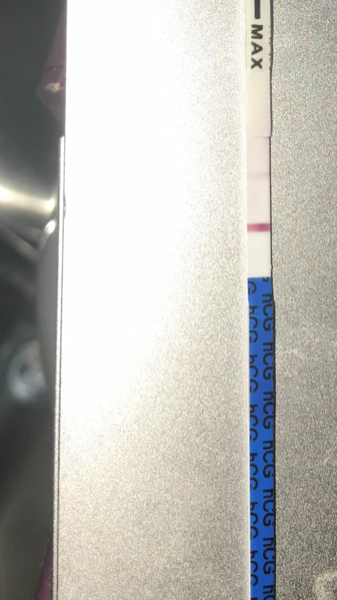