Am I spotting or is it period blood 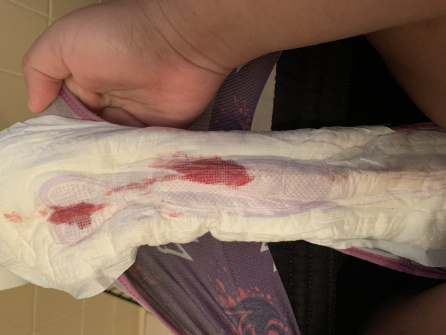 Hello so I’m kinda freaking out and if somebody could guide me I’m only 18 years old and I don’t really know what I’m doing I would like to know if this is sporting or is it period blood I had unprotected sex I believe it was on my ovulation days it was way after my period took a Plan b then had 2 days after unprotected sex again then didn’t took no plan b or nothing , since that happened I been feeling nauseous got to throw up twice , mood swings , diarrhea, randomly headaches and yesterday started feeling some type of cramps like pinch’s i could say very light compared to my period came to the restroom to check and I was bleeding a lil bit then I thought it was my period but I had already got it this month of April and I never get my period twice in a month so I put a path but it’s lightly that it doesn’t even cover the whole pad and it only comes out in the front of the pad and the cramps come and go the blood it’s not a lot like usually I get on my period , it also looks kinda brown and pink but when I wipe I see blood like medium but not on my pad like it’s just a small amount if somebody could tell me if it’s pregnancy spotting I took a test yesterday but it was obviously negative because it’s way too early to tell but is this spotting ?
0