Bleeding, spotting-is it a miscarriage 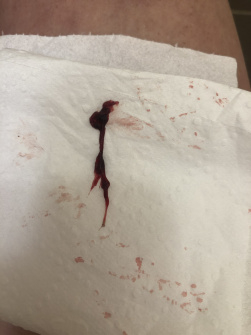 I’ve been having issues with the implant contraception and had it removed there was a few weeks gap that I was not on anything, though we used condoms, I had the depo 3 weeks ago and did a pregnancy test it was negative
after having sex last week I began bleeding, the bleeding was not like my issues with the implant it is very very light and bright red in colour, so I went to the doctor today and did an pregnancy test again and negative but once I got home I had an odd discharge, I reached out to a friend and sent a photo and she said it looks like I’ve miscarried?
I’m so confused, never experienced one before and I’m not in any pain and bleeding has not increased over the week? What should I do..
0