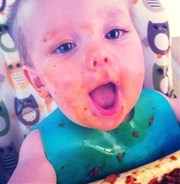 O had his first settling in session today. When we looked around I'd spoken to them about BLW and cloth nappies etc and they said it was all fine. Today we were there during snack time and his key worker asked me what fruit he could have and if he needed it to be mashed up. I said I give him everything apart from grapes (I'm way too paranoid about them) as we do BLW so he just needs it is pieces that he can pick up. So they came back with the tiniest strawberries (I think she was being cautious) on a huge tray which was passed around from child to child to pick up one piece at a time. She gave O his fruit into his hand which I didn't really mind as he;d probably have swiped all the fruit off the tray but after a few pieces she then put it straight into his mouth which made me a bit uncomfortable. I know I should have said something then but I was on the spot and she'd already looked at me as if I was a crazy hippy lady when I mentioned the cloth nappies.

Any other BLWers sent their babies to nursery? Did they manage OK with it? I really don't want them to be feeding him, I got the impression today that it was all going to be a bit too much mess and faff. He's the youngest in the baby room, all under two but I think he's the only under 1.