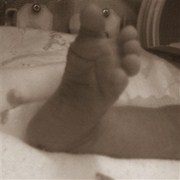 Hi ladies. I've been hiding myself away since before Christmas, but thought I would pop back and update on how we're doing.

The 12 week scan in December looked fine, but the blood results that went along along with it were less so. I was informed while waiting for a flight at Heathrow that one of the hormones they checked was sub-threshold, and as a result I'd need extra monitoring. They wanted me to go along to the hospital that day, but as I was 20 minutes from boarding a flight 3 hours away from home that wasn't possible. So this obviously played on my mind throughout our Christmas and New Year trip.

We met with a consultant the day after we landed back home, and were told the risks from this particular hormone level - miscarriage, stillbirth, and pre eclampsia. After 20 weeks I would be given scans to monitor baby's growth approx every 4 weeks, and my blood pressure would be checked far more regularly than the average pregnancy.

On the same day, at 15 weeks, I started with HG. At that point I thought it was just a bad day for sickness, but after 3 days solid of throwing up and not even keeping down water, I went to the GP. In the last 5 weeks I've been through 3 different kinds of medication for it, barely escaped hospital admissions for IV fluids, and even though it is easing slightly I'm still over half a stone lighter now than I was pre-pregnancy. In the first week of HG I lost over a stone.

As if all that isn't enough to worry about, the 20 week scan raised flags about Sparkly Baby's heart. We had to then wait a week to see a consultant for her opinion, which was yesterday, and we've now been referred to the fetal cardiologist team at a hospital an hour away.

At this point we still don't know for sure what's wrong, how treatable it is, and what the outlook for Sparkly Baby is. We are terrified. Our appointment there is next Thursday, so another week of waiting and worrying.

I'd had a niggling feeling from around 14 weeks that something was wrong. I tried to convince myself I was just paranoid after our epic journey to get here, but I couldn't shake the feeling off. I guess it shows my maternal instinct works, right?! So that's where we're at for now. We have no idea what the future holds and I'm still too scared to start planning and shopping for baby. We're certainly going about all this the hard way!

ETA: The appointment with the fetal cardiologist isn't about checking whether there's a problem and there's no hope there isn't. It's been detected by 3 people now. It's about getting a confirmed diagnosis from a heart specialist and having a treatment plan in place before baby arrives - without which the outlook would be extremely bad. While we don't currently have a diagnosis, we do know it's a serious defect and will absolutely need specialist monitoring and treatment - we just don't know the extent of the problem because our local hospital doesn't have staff trained for this kind of thing.