As most of you know, I met with the Local Panel at the end of last month and on Tuesday I had a call with the Online Panel, so I wanted to update you all on what we discussed:

Since The Mumdrum launched just over a year ago, the site has attracted over 8 million page views, close to 1 million visits and nearly 150,000 unique visitors, which is great for a new site.   And our unique visitor numbers and membership base are growing rapidly.

A lot has happened since the last set of Panel meetings, including:

The Forums are not as busy as we would have expected at this stage.   We have undertaken paid advertising on both Google and Facebook, but as so many sites offer forums it is difficult to attract new forum members.  We anticipated that new members joining the site to create a Memory Book would also participate in the forums, however unfortunately this has not proven to be the case so far, but we have plans in place to improve the cross-promotion of the site.  An e-mail introducing The Mumdrum continues to be sent to Hitched members who have recently married.

The Panels have suggested more Live Web Chats, such as The Lullaby Trust one that we held at the end of last year, as a way of encouraging forum traffic and new members, which is a great idea.  If you have suggestions of parenting charities / brands / experts that you would like to see join us for a Live Web Chat, please let me know.

In regards to bug fixes / enhancements, we have taken your feedback on board and are revisiting Private Messaging as a high priority.  I hope to have a timeline for delivery of this next week.  We have investigated the recent photo upload issue and have decided to build the ability to add photos from the mobile site to resolve this.

Our focus for 2014 is on brand awareness, registration, Memory Book creation and the development of new revenue streams.  We will also be implementing plans to encourage new members to try out the Forums.

At the beginning of the year we kicked off our 52 Memories challenge and this has been really well-received with lots of social media and print coverage, including a half page feature in the March edition of Prima Baby magazine: 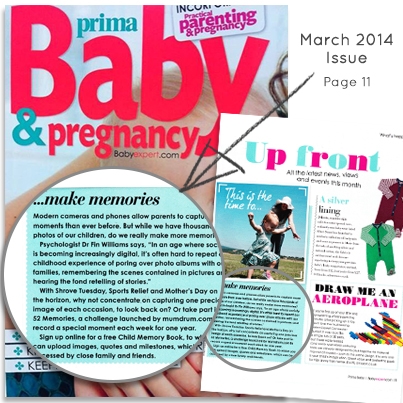 Search Engine Optimisation (where The Mumdrum ranks for pregnancy / baby / parenting keyword searches) is an important component for us.  However, this is not a quick fix and is something that will take time to build.

Both Panels agree that it is still valuable to meet / call once every few months.  A couple of members have now stepp