This is the feedback thread for those of you who are testing the SmarTrike Recliner Infinity 5-in-1 trike for us as part of our latest MadeForMums product test.

You should all have received your trike (or it's speeding its way to you right now!). Do have fun testing it out with your child and olease also take some pictures of your child on the trike.

Then, please give us your feedback on this thread by answering the following 5 questions:

1. What did you think of the SmarTrike Recliner Infinity when you first received it?

2. How did your child get along riding in the SmarTrike Recliner Infinity? Please post up the picture(s) of your child sitting in the trike (to upload a pic, click the little camera icon at the top right of the 'Add your reply' box)

3. What do you think of the accessories that come with the SmarTrike Recliner Infinityy?

4. What do you think of the parent handle?

5. Would you recommend the SmarTrike Recliner Infinity to a parent with a child the same age as yours?

Everyone who leaves quality feedback on this thread (and is part of our product test) will be put into a draw to win a £50 Amazon voucher. 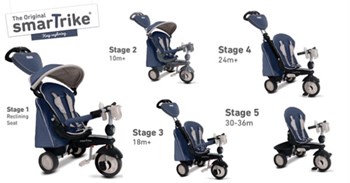 The SmarTrike Recliner Infinity, £129.99, is suitable for children aged 10 months to 3 years, and is 5 trikes in 1 – moving, as your child grows, from pushalong recliner to stroller mode to guided trike, training trike and classic trike. It has a patented Touch Steering technology parent handle and shock absorber, and comes with a storage bag, canopy, seat cover, bottle holder, and toy telephone.