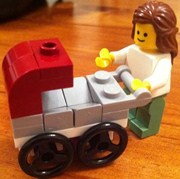 The Graco Mirage+ Travel System, in Black Rock is a great value travel system. It comes complete with a Graco Junior Carseat, and a rain cover, so is a fab starter set. It does require some basic assembly, but once built, it can be folded down with one hand, in just 1 second. It is also freestanding, so great for use on the go.

I like the fact it works as a Travel System, but I personally would get the car seat base as well, so you can pop the car seat into the car and remove it in seconds. The car seat comes with a 3 point safety harness, and a newborn head hugger. It doesn't have shoulder support pads, though.

One thing worth mentioning is the Graco Mirage+ car seat only attaches to the pushchair when the play tray is in position. It clicks onto there easily. There's also a velcro strap under the pushchair seat, which attaches to the carseat for extra safety. (I forgot this was in place the first time I used it, and was baffled as to why I couldn't remove the car seat from the pushchair).

One HUGE plus for the Graco Mirage Plus TS is the fact the raincover is compatible with the pushchair when used independently AND as a travel system! All other travel systems I have used have needed two different covers (which usually have to be bought separately).

The Graco Mirage Plus Travel System lives up to the promise of having a fast fold and unfold. I like the fact it stays locked when it is folded, too - this makes transporting it easier than other prams I have had.

The Mirage + TS is ideal if you're looking for a good value, lightweight travel system. The hood covers my baby well, and my toddler loved the play tray. The wheels can easily be flicked between swivel and locked. The wheels are made of plastic, and this isn't an issue on smooth paths, but the ride is a little bumpy on uneven surfaces.

My daughter fitted into the Graco Mirage Plus Travel System easily. I love the fact the top of the seat doesn't have a metal bar, like so many other pushchairs do, as it means taller kids can sit upright in it, happily.

I drive a Vauxhall Insignia (large family car). The Graco Mirage+ TS half filled it, but there was room above it for shopping bags. The basket is a decent size, too. I fitted 2x 2 litre bottles of milk in there with the rain cover!

The seat reclines between 100 and 150 degrees, (almost sat upright to slightly raised - NOT lay flat). If you are concerned that is isn't lay flat, you can always use the car seat instead for the first few weeks. It's a bit fiddly to adjust the seat level on the pushchair. There is a buckle on each side, which needs undoing to go between the middle position and the lowest one. The seat pushes and clicks forwards into the fully upright position, from the central, buckled one. The Mirage+'s safety straps don't have any padding. The brakes work well on flat terrains, but I haven't tested them on steep hills.

All told, I like the Graco Mirage Plus Travel System. It offers great value for money. If you are looking for a good value travel system, and aren't bothered about getting all the extra "bells and whistles" included, then I highly recommend it.

It is good for use as a 2nd system - if Grandparents or childminders look after your child a lot. I think it's light enough for use on a UK holiday too. (Not sure I'd take it on a plane though).

I would the Graco Mirage Plus Travel System 4/5 - knocking off 1 mark for the missing support pads and the fiddly recline.