any tips for newborn and toddler? 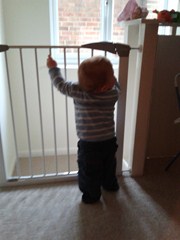 I would LOVE to hear any tips for coping with feeding routines - breastfeeding/bottle feeding the new born and feeding toddler plus trying to eat yourself???

any tips for coping with lack of sleeps. I used to nap when my baby girl napped but this time obviously that won't be happening as my two year old no longer has day time naps. So when do I sleep????

I am slightly panicking, any tips and advice, however small, I'd love to hear!!!!