So I had my implant out on March the 17th and was having a period when I had it out, (first period in months on implant) and the period continued for about 5 days after implant removal. I had unprotected sex quite a few times after removal and it has now been 40 days since last period... I know implant removals can make periods irregular but I have been testing and getting bfn's .... I took a clear blue digital on like the 37th day and came up not pregnant...and today (40th day) took a cheap Amazon test....I am sure I am seeing a barely visible faint line!? It's pinky and its there .... The amount of tests I have taken this month I have never seen a line like this....I did read something about Evap lines and so that made me think maybe not ...but I've never seen a line like it on all the tests I've done from the same pack!! Can anyone else see this? It was hard to capture it on a photo it's so much more noticable in person! I am also so unsure If I have had symptoms or not... At least not any noticable if it is possible that I am pregnant .... I have been sooooooo tired all the time and soooooo moody! But then again I keep telling myself I'm always tired and moody lol! I also thought at one point I was having cramps but then also thought it was just wind!? I have been so lucky to never get period pains so don't know what period cramps feel like. Anyone??? 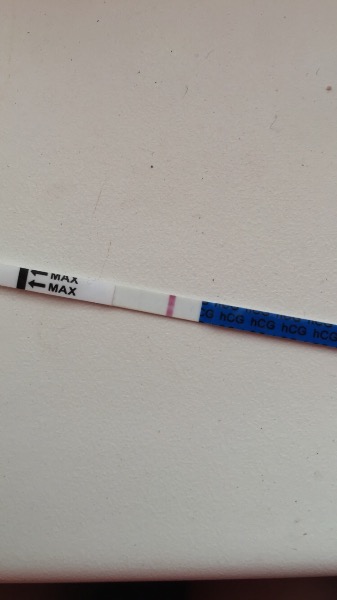