Hi everyone as the title says I'm 14 days late. I'm never later then 29 days was due on the 29th november which was my 35th birthday.

3 days before period I had pink then brown spotting thought I had started but there was just a dot or 2 for 3 days. Since then I've had creamy cm some days really heavy like today which shows on the picture below. Feel wet all the time and keep thinking af has reared her head but nope. Also had yellow tinge stretchy cm the other day which was weird.

Also had a uti just over a week ago which I have never had and docs put me on 7 day antibiotics just incase I am pregnant.

Also the last couple of days been suffering with acid reflux which I haven't suffered with since I had my gallbladder out when I was 26.

Took so many tests including 2 frer 1 cb ultra early and loads of Internet cheapie.

Also not stressed I'm actually really happy in myself. This is just mind boggling as not sure if pregnant or af is just usually late. I have no sore breasts which is my af giveaway every month without fail a week before my period they kill and this time nothing. 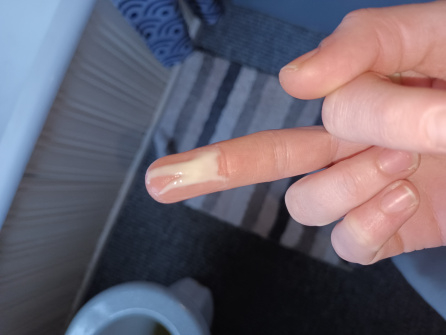 Thank you, sorry for the tmi pic which was from this morning.