brandi13
May 1, 2022 7:23PM in Trying to conceive
First I should start by saying I’m extremely irregular with periods. I had my last period March 30, my period was due this past friday April 29th, according to flo. I took two pregnancy test last week April 26-27 both maybe indents from first response early response, I say probably indents bc I took two more after April 28-29 and I saw no second line. Anyway, Saturday (Yesterday) came and I was going to meet a celebrity I love so I assumed it was nerves making me feel nauseated and not being able to eat bc I felt like vomiting, also Friday, yesterday (Saturday) and today as well (Sunday) I’ve had cramping not painful like my periods but enough to make me feel uncomfortable and on top of feeling nauseous it made me even more nauseous. I took midol and went about my day. Also, EXTREMELY tons of wetness down there like creamy in underwear.. so anyway, this morning I woke up, (sunday may 1st) and I felt SO nauseous worst than yesterday to the point I have zero appetite even though I’m starving I’m just so nauseous still right now. Anyway, I just went to bathroom and noticed this… could this be implantion bleeding? I have two other kids but I don’t believe I had implantation bleeding before.. please help. I would love another baby so I don’t want to get hopes up. Me and bf have had unprotected sex and he has ** in me. If it is implantation do you think that’s why pregnancy test is showing negative bc it’s early or am I just getting my hopes up? Sorry if pic is tmi.. I don’t see pic showing but it’s just a tiny light pink maybe red dot looking. 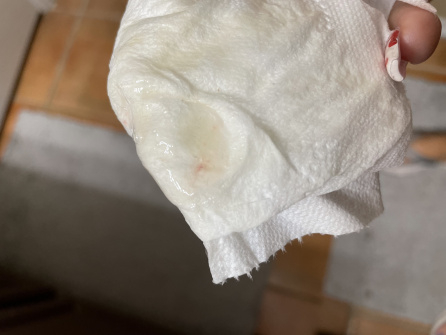