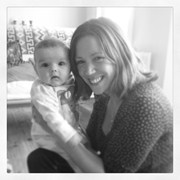 I have just gotten through the first two and a half weeks of weaning Annabel who is nearly 6 months old, she was 21 weeks when I first gave her food. So far I think she has done quite well, she has enjoyed virtually all that I have given her.

I started with baby porridge each morning at 10 am after she had had her early morning feeds about 5-6am then al top up at 8ish (breast fed).  After 4 days of this I then introduced an evening solid feed at roughly 6pm, bed time is approx 8pm. We started with plain sweet potato which I had boiled then liquidised, this went down very well, Annabel loved it! After another 3 days I wanted to add some more flavours and textures, with it being so hot I wanted to give Annabel something refreshing and hydrating. I made her a pea and courgette puree (see recipe exchange thread), she enjoyed this too. Every two to three days I would add another flavour/new food, if Annabel had had an allergy I would have had a good guess as to what the cause was. I tried to add flavours to already tried food, for example I added puree carrot to sweet potato as I knew Annabel could tolerate sweet potato.

So by the end of her two and a half weeks of early weaning she had tasted a variety of foods, flavours and textures, including banana, plum puree mixed into her porriadge, roasted peppers, carrots, courgettes, peas, roasted tomatoes and of course sweet potato. I wanted to slowly introduce more exciting flavours so I made her a curried parsnip and apple dish (see recipe exchange thread). She didn't really like this as much as other dishes, it was extremely mild so don't think it was the spice, but I will leave it and try again in a few weeks.  I am also giving Annabel water from her feeder cup alongside the breast, she has always refused the bottle.

Our next step is to add a lunch time solid, which I think will be a fruit based dish, as I have mainly given Annabel vegetables so far. I am nervous about her being on 3 'meals' a day as I think it will mean a lot of forward planning on my behalf and ensuring when we leave the house we have enough food with us.

All that Annabel has eaten has been pureed, we haven't started down the baby-led route yet, I was aiming to do a mixture of both but currently I am enjoying making the dishes and Annabel is enjoying eating them.