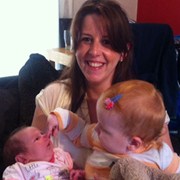 Harlowe has been full of a cold for the past 10 days, well in herself, sleeping well but she has gone off any purees that are being offered. So basically her breakfast and a few bites of porridge before bed. I cant even give her some yoghurt!! While we are doing mainly BLW and she loves this, I can't say she is actually swallowing a whole pile. I always think she is doing great because her mouth is full and I see her putting the food too her mouth but when I pick her up there seems there is more food in her high chair than when I started feeding her. How is this even possible?? My worry here is that she is going to start waking more for milk because her belly isn't full. Already her night feed is getting earlier and earlier... any advise please xx

DanielleMFM
Jan 27, 2020 10:39AM
Due in October 2020
Hello and huge congratulations on your pregnancy! I'm @DanielleMFM and it's lovely to see you here - welcome to Due in October 2020! If you'd like to join this thread and meet others due this month too, please introduce yourself. Start as many threads as you like in Due in October 2020 from due dates to baby names,…

Happymummy14
Jan 26, 2020 10:36AM
Hoping for a BFP in Feb
Thought I would start a thread for all those TTC and due to ovulate/test in February. I am currently on cd5 and month 2 of TTC #4 and AF is in the process of finishing up, I'm due to ovulate around the 8th of Feb and will be using opks to track ovulation and I have recently started taking seven seas trying for a baby as…