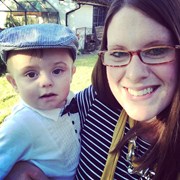 I'm really interested to know what rules you guys all follow when it comes to high sugar/fat treats such as chocolate, sweets, cakes, biscuits and pastry? How old were your children when they were allowed to eat these items and how often have you allowed them? What portion sizes do you allow?

Bert is only 7 months and he hasn't had any such foods yet - I plan on holding on as long as possible without him eating them but some of my mummy friends have allowed their children to have them freely from early on. I read a great book when I was pregnant called 'French Children Don't Throw Food' and I found it very inspiring - the French's attitude towards these treat foods is that they shouldn't be banned but should be allowed as part of a healthy/balanced attitude to all foods - for instance they give squares of chocolate and baguette with hot chocolate as an after school snack. The theory is that by limiting it and putting that food on a pedestal you make it seem more exciting.

I'm determined to bring up Bert with a healthy attitude to food but I don't want him to be over weight (as I was as a child) my upbringing made me use food as a crutch and I ended up very overweight - I've just managed to lose 3.5 stones and I never ever want Bert to need to lose a large amount of weight like I've had to.

I hope to use my judgement and common sense in terms of when to allow Bert to try these foods, and how much to allow him…I'd be interested in your input and to know what happens in your homes...

SP28
Nov 14, 2020 10:24PM
TTC December 2020 🤞💕 hoping for BFPs for Christmas
Continuation from the October thread. Hopefully many of you won’t need this thread, keeping my fingers crossed for everyone. Currently CD 9 ovulation predicted in 13 days but cycles are all over the place so started taking opks today just to be cautious. This is my fourth cycle ttc baby number one. Anyone in similar…