Our beautiful Eloise has Downs Syndrome 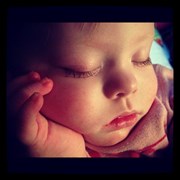 Rachalow
Mar 31, 2016 8:46PM in My baby was born in Jan 2012
Well as the title says our beautiful baby Eloise has been diagnoised with Downs Syndrome at 10 days old.

After having an amazing 4hr birth and home 3.5hrs late I thought everything was fine and dandy and started to settle in at home with our new little family.

When Eloise was 2 days old two midwifes came to visit and did all the normal checks. The following day my GP came to my house to check her over which was all fine and nothing picked up. On the Wednesday I went to the clinic to have her weighed and she had dropped 9% body weight and gone down to 6lb 6oz.

I told the midwife that she was really sleepy and floppy and was really hard to wake and feed her (breastfeed). Midwife told me to strip her down, tickle her, wet cloth anything to wake her and feed her for 45 mins.

Feeding was becoming impossible, she was just holding my boob in her mouth and not even sucking. I decided to express so I could see how much she was having and it helped. I got her weighed again last Saturday and she had put weight back on, so expressing was working! I was told I need to get her weighed again on the Monday as she should be back to her birth weight......... again nothing picked up!!

On Monday when Elosie was 10 days old I went to the clinic and said that she is feeding really well from the bottle with my expressed milk but I really wanted to get her back on to me as by the time I had expressed, woken her, fed her, washed everything up sterilised it, it was nearly time to start again (as I have to feed and wake her every 3hrs). The midwife asked if I would like to see the breast feeding lady at the hospital which I said yes to. The midwife called the hospital and I was able to go straight up there.

Monday 30th January then turned into the worst day of my life. We ended up going for a breast feeding chat at 930am and didn't end up leaving until 830pm that evening. After struggling to get her fed and that fact she was so floppy and not interested in feeding, the breast feeding lady got a nurse, which then turned into a neonatal nurse seeing Eloise and then a consultant. Eloise was diagnosed with Downs Syndrome and the signs were there and should have been picked up at birth!! I had spent 10 days battling with a baby which wasn't feeding and losing weight for a reason.

Elosie had lots of tests done on Monday which were all fine (ECG, blood pressure, bloods taken and oxygen levels), her hearing is also fine, which is great!

We are still awaiting the results of the blood test to confirm which type of Downs she has and also a scan of her heart.

It has been the worse week of my life but each day has got a little better. I am grieving for a baby I thought I was going to have but at the same time totally in love with our darling Eloise.

I wanted to post sooner rather than later so that I can just move forward and in time when I post photos or we chat about development it will become apparent that she does have DS.

When I had my 12 week scan my downs results were 1 in 6,200 chance of Downs Syndrome and I was that one.........!! so just really unlucky!! If I had found out whilst pregnant I wouldn't of had an abortion but I would have had months to come to terms with it, rather than the shock we had on Monday.

Everything is so raw still and I feel like I'm in a dream but I will be ok, just need to make some adjustments and things will be a little different for now. I have lots of friends and support and just want to start enjoying and showing off my new baby girl

On a lighter note I have invested in a double electric breast pump (??265) which is great and cutting my pumping time in half. It comes with a belt so you can pump hands free.......... Its hilarious, so you can do your house work whilst expressing!! Hope the postman doesn't knock one day while I'm pumping away!! Lol.........

Would def recommend the pump though if anyone else has feeding problems, it's the Medela Freestyle!

Anyway need to start pumping again......... Congratulations to everyone else and hope you are all doing well.

PS - I have had about 3hrs sleep in last 24hrs so please excuse spelling, etc!