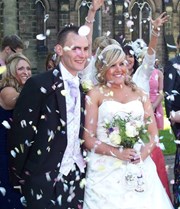 Hi im wanting some advice me and my husband got married on 7 June and came off the pill in january 2012 as i had been on it since i was 15  and we new we wanted a family once we were married, (we used condoms before then) so we've been trying since the wedding, i know its not been long but im starting to get a little concerned that i haven't fell pregnant yet. we're both 25 and  he has a little boy already so all is well on his side, I know im not the first and I'll not be the last to think this but you go all your sex active life not wanting to get preg and when you want to it doesnt happen - I've never got caught before always been verry careful.

I've started doing ovulation tests last month but think started doing it to late so no ovulation,My periods are heavy and last around 5-7 days but 10 days into my cycle i started spotting ( i searched this and could have been ovulation or implantation - got my hopes up a little) however later that day i had heavy bleeding and continued for about aother day and a half. This has never happened before! my normal period would have been 3 days ago and I've had nothing yet so not sure if i need to now calculate from the 3 days of irregular bleeding ? i have had realy bad back and cramping for around two weeks - i dont feel pregnant but really want to test but will be disapointed if its neg?

so now I'm even more confused i continued to do ovulation tests - but the tests say two lones one in each box the T line needs to be darker or equal to the C line this hasent happened yet -for a couple days it was there but lighter than the Test line - could this have been my Ovulation days?

Sorry for the essay, has any one else experienced this or can offer any advice