This is my story with Pregnacare and thought I would share to inform others. Before I get into this, as my title says I'm not saying this happens to everyone, just some unlucky women like myself.

The beginning of the year myself and partner decided to ttc. January 5th I had my IUD removed and my doctor recommended I begin taking Pregnacare, Trying to conceive, so immediately I started on this. My cycle is usually 31 days and was expected January 27th. This date came and went, at 1 week late I decided to poas, got a bfn. At 2 weeks late I went for a blood test, another bfn. At 3 weeks late I took several hpt and got several bfn. At this stage I was very confused and upset. I had every pregnancy symptom you can think of; sore breasts, fatigue, back ache, even sickness. Eventually on February 21st AF arrived almost a month late.  I put my late period down to my body adjusting...

This is when it gets weird... My urine turned luminous yellow, when I say luminous I mean it looked as though it could glow in the dark, and to add I began to get pains in my side. I went to the doctors countless times to the point they got sick of me, they couldnt find anything wrong so stupidly I brushed it off and continued ttc and taking Pregnacare.

Now expecting AF to arrive around March 21st I have got nothing! Now late again with bfns! This time at my wits end I decided to do some research for myself online. I came across many forums of women claiming Pregnacare extended their cycle and gave them pregnancy symptoms, including the luminous yellow pee! Some even say it stopped ovulation. All their stories matched up to mine.

So now I have completely stopped Pregnacare in hopes of AF coming soon and being able to truly ttc. I'm holding no hope of getting AF this month which will mean I will have AF twice in 4 months! I had a very regular cycle before, could time my watch by it.

I just want to make this known and inform you to do your research before taking Pregnacare, it may work for some but not all so if you notice anything within the first month of taking, I would advise to stop immediately unlike I did. Now I feel my first 4 months of ttc to have gone to waste.

I have attached a picture of the Pregnacare box where they have mentioned delayed cycles without pregnancy. Obviously they are aware this may occur but I dont feel its known widely enough. Not sure how clear my pic is, if its not clear pop into your local store and have a read. 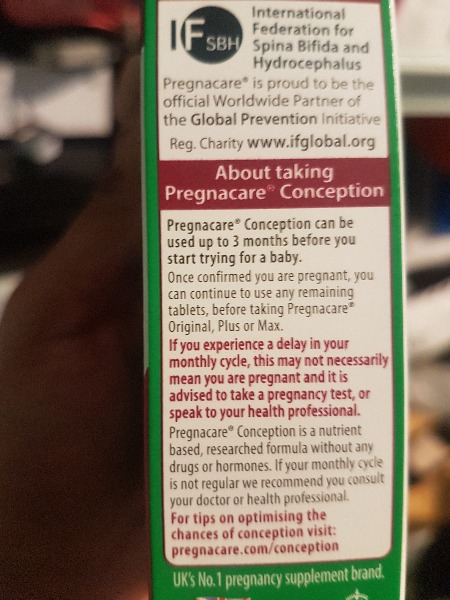 Hopefully it works better for you but I will never be taking this again.