Would you take your baby out in public wearing just a nappy (weather permitting, obvs)?

We'd love to know your views on a baby-wears-nappy story that's getting everyone hot under the collar in Australia.

It all started when Aussie radio and TV presenter Yumi Stynes went to the premiere of Paddington in Sydney. She took her 6-month-old baby daughter Mercy with her – and posed on the red carpet, with baby Mercy only wearing a nappy. (It's pretty darn hot in Sydney right now.)

Here's a pic of Yumi and Mercy on the red carpet: 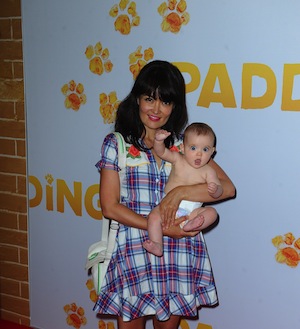 A journalist working for the Daily Telegraph saw Yumi and Mercy and said Yumi's decision to take Mercy out wearing only a nappy was 'weird' and unhygienic.

'There was only one fashion faux pas on the red carpet,' he wrote. 'It wasn’t a celebrity revealing a little too much. It was a baby wearing nothing but a nappy.

Yumi – and many Aussie commentators – was shocked at the journo's remarks. She replied: 'I don't believe in judging babies by their outfits. She's a BABY. If we have reached a point where that's an issue, then we truly have all gone mad!'

But what do you think? Would you take your baby out in public wearing just a nappy? Or, like the Telegraph journo, do you think it's weird?

Please do let us know!