MadeForMums is on TikTok!
Find and follow us here! 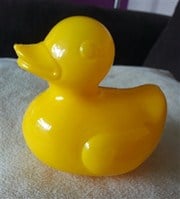 P is now 3 months old and we are having trouble getting her to settle at night. For the first few weeks she was fine and we would put her in the crib awake and she would shuffle about for 5 mins then nod off. Its been getting progressively worse. I started having to bf her to sleep even though she had just had a big bf and ff top up but now even that doesnt work and she thrashes around and pulls at my nipples and gets very agitated. I think this is because she wants to suck for comfort but doesnt want milk! She refuses to take a dummy.

I try and have the lights dim etc downstairs and i put her in her crib chilled and sleepy but the moment she is in there she is wide awake and almost like she is hyper! She waves her arms and legs about and then starts crying. Last night i did a bit of baby massage on my bed to try and calm her but it didnt really do much. We had a nightlight on next to her bed toi in case she doesnt like going from light to totally dark but that didnt seem to help. We have ordered a slumber buddy which we will try hopefully tonight.

I think there are 3 issues - 1-she is going to bed too alert with not enough winding down so looking for ideas to try. 2-she wants to suck but i dont think this will be cured till she either wants a dummy which i am persevering with or finds her fingers. 3-she is always bunged up (this is an issue i am sorting with GP hopefully and a whole other story!). I put a bit of baby olbas on a muslin last night and it helped her a lot so that issue is being sorted.

DanielleMFM
Jun 26, 2020 9:04AM
Fancy testing Bacofoil Zipper Bags? £300 Amazon voucher up for grabs! Sign up here!
Hello. We are looking for 20 parents or carers to join our latest MadeForMums product test, to test out Bacofoil Zipper bags. Bacofoil says “Our Zipper bags are the perfect all rounder. Not only are they great for freezing batch cooked food, storing and freezing soups or liquids, (they even come with a handy stand-alone…