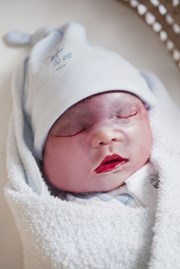 I feel I need to let everyone know about what happened to us just incase it can help someone searching for the same symptoms as it could save their pregnancy.

My wife and I just lost our baby(May 8th 2012) at just under full term as his heart stopped beating just 2 days after having an ECV performed. We had a postmortem carried out and they found that my wifes placenta had signs of Chronic Hystiocytic Intervillositis (C.H.I. for short). This is a very rare condition that only 4 in 10,000 people (in the World) have. Could be more but not many people get postmortems on the placenta etc. after miscarriages so it's hard to tell.

Basically, my wife had 5 times the amount of Alkaline Phosphate in her blood. Normally these levels rise during pregnancy but not to the excessive amounts that they did with her. Our hospital looked into the levels and wrote them off after they found she didn't have liver cancer (which would have been the main cause) but we were still very concerned as you can imagine as we thought something was wrong. They just assured us all was well and stupidly we just went along with it as you put trust in the specialists as they've had years of experience.

(We found out later that the high levels of alkaline phosphate were a symptom of CHI.)

There were no signs of anything being wrong really apart from the high alkaline phosphate levels and some pre eclampsia so we were totally shocked when we went for a scan 2 days after the ECV and they failed to find a heartbeat.

We did extensive searching on google for high alkaline phosphate levels during pregnancy but hardly anything came up so hence this post on the forum as it's very important (if you're reading this after a search for the same symptoms) to get this looked into. There isn't much info on the treatment about CHI but I've found you can take blood thinners, high doses of steroids etc. to help and very strict checkups and scans reguarly.

If my wife gets pregnant again there's a 50/50 chance this could happen again but we're willing to risk it after trying for 10 years and failed attempts of IVF.

The strange thing with our baby was that he was above average in weight which shows the placenta was working well so get the feeling the ECV turn might have done something to the placenta...but I'm just guessing. Seems kind of obvious though.

Here's the CHI support site which is the best around and if you join the facebook page of theirs you can get support from other people with the same condition: chisupport dot dreamhosters dot com

Hoping my post may help at least one person...and also hoping no-one else gets CHI for a long time but fear it's not going to be the case.