I had my daughter in 2016, I found out when I was 6 months preg! It was a shock for me and my partner however we coped - even with her also being 6 weeks early! We were in and out of hospital pretty quick, I went in on Tuesday gave birth on Thursday and we both came home on Sunday 😁 > (I PUT IT DOWN TO BREASTFEEDING!!!) (I only breastfed for about 6 weeks but as they say every little helps 🤣)

So anyway, I suffered with post natal depression after I had her I think it was the whirlwind that consumed me, I ended up falling pregnant quite quickly afterwards (she was about 4 months old) and I had a termination 😔 Pleased don't judge - - I was an 18 year old first time mum with a boyfriend who didn't know how to cope with everything, I had postnatal depression and a young tiny baby! Anyway, after having a termination I got the implant fitted. I had it in from  August 2016 - end of March 2018. I had it taken out because it made me put on 3 stone. I have stretch marks all over my legs and hips (I didn't get stretch marks when I was pregnant, I was 9 stone 2lbs when I gave birth to a 5lbs 1oz baby!!!)

So I had it taken out and was told it would be a while before my periods went back to normal - SO TRUE!! I was put straight onto cerelle after taking implant out, but decided to come off it to see if I got my period at the beginning of August. I had my first period after the implant in mid August this year (5 months after having implant removed). I don't think I've been happier to be greeted by Mother Nature before 🤣

So me and my partner decided we'd like to have another baby - jobs are going well etc so it's the right time for us, and my daughter is a nice age for a gap to be. So we began to have unprotected sex - not often but whenever we could (we're not in a rush to get pregnant, but if it happens we will be happy). I went to the doctors to discuss this, along with some other issues I've been experiencing - bloating, hair growth on chest, rapid weight gain, irregular periods. I was gobsmacked that they told me it sounds as though I have polycystic ovaries. I had an internal exam and everything looked fine. But she has referred me for an ultrasound on my ovaries in 3 months time. I was told me fertility rate is at about 30% 😭

Anyway my partner and I decided to start trying still and see what happened. I got a period tracker app on my phone and after inputting the details of my period this month (September) it calculated I have a 34 day cycle.

My period this month was from 16th-23rd. I had unprotected sex on the 3rd, 11th and 16th of September. My period was VERY heavy this month and I suffered terrible cramps - worst I've had since I was about 15.

Anyway I came off my period on the 23rd but this week (25th) I started spotting again. Pinkish/brownish blood when I wiped. This has continued until today (not heavy, I've only had to wear a panty liner and there's not a constant flow).  I did 2 ovulation tests on 27th (yesterday) and both were strong positive. I did a pregnancy test last night at around 8pm. It had one strong line and one very faint one. My partner told me to wait and do another this morning so I did - and again same result. (I have posted pics, pink is last night, purple is this morning)

Do you think I'm pregnant?

I have had a lot of bloating recently, I've been suffering with acid reflux and I've had really bad cramp in my legs. Are these symptoms?

If I am pregnant surely I can't be more than a few days? 😱

Can anyone help pls? 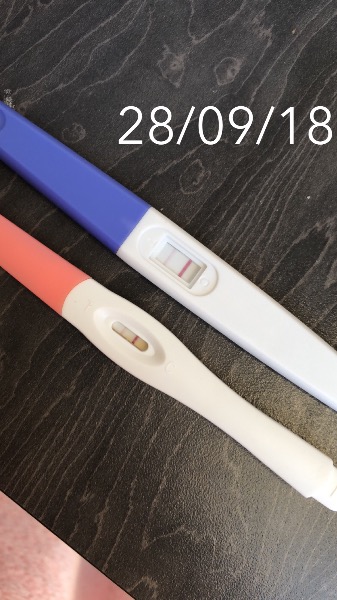