How Aggressive and Cruel are Children?

My girlfriend is pregnant and of late I've been reliving my own childhood traumas. So much so, that I decided to ask around the rest of my family, particularly my older brother who has a daughter. She's now fifteen, but my brother remembers his wife fretting about a rather terrible and terrifying environment at a Roman Catholic nursery.

To begin with, there was a young girl that attended who was fatherless. She was an only child and her mother was likely inexperienced. The young girl in question was supposedly exposed to extremely cruel treatment from her peers.

Some of the incidents include:-

Often pushed to the floor or pushed into walls or furniture.

Items of clothing such as shoes stolen.

Paint, glue and water thrown over her.

Picked up off the floor and carried by the physically stronger children.

Attempts at "dunking" in the toilets.

Frequently hit in the head by projectiles such as wooden blocks and lego.

Ostracized by the other girls and kept out of all the fledgling friendships.

Physically attacked with slaps to the head, face and other children carrying her, pulling and twisting her hair.

The girl in question supposedly never really recovered, and was always thought of as a black sheep. It was said that the other children went on to hate her because she wanted to be "too special." She would often stamp her feet, cry loudly and go running to the nursery attendants. In fact, by the time she had been bullied several times she was almost always waiting and looking to be rescued by the attendant. It became reflexive. She would also wail extremely loudly in terror. It was something of a pulsating scream that sounded something like "Mam, Mam, Mam" but more incoherently because of her distress.

Several times she was removed from these run-ins by the attendant. The young girl was supposedly bitter to the point that she began encouraging the behavior, and sought out the children who attacked her, in a bid to make them do it again so that she could get "rescued." She would often taunt the other children and try to tease them and let them know of her disgust at their behavior. She also made several "diva-like" speeches from the sanctuary of her mother's arms, in a bid to wind up and infuriate her peers. When she did this, her mother proceeded to hang her upside down by her ankles and the other children looked on curiously. My sister-in-law cringed at the memory, but it was apparently some kind of primal olive branch. 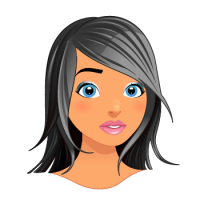